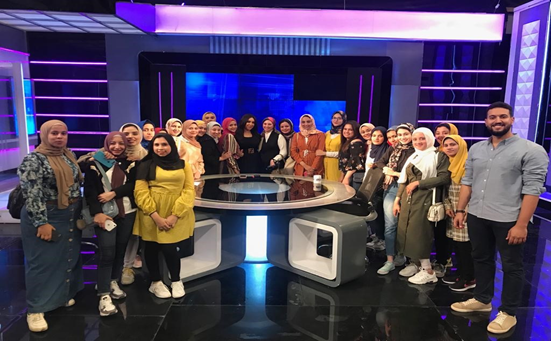 Within the framework of the interest of the Faculty of Mass communication and Public Relations at Nahda University in field visits to various media institutions, In order to permanently link students with the labor market and its developments, the faculty of Mass Communication, under the patronage of Dr. Adel Abdel Ghaffar, Dean of the Faculty, organized the first visits by students for this academic year to Al-Nahar channel on Thursday, October 3, within the framework of the weekly visits that the faculty allocated to media institutions every Thursday.

The students received Mr. Maged Amin, producer of Akher Al-Nahar program, who accompanied the students to the main studio of Al-Nahar channel, and gave them a detailed explanation of the importance of lighting and how to use it during filming. The students also learned how to manage television episodes inside the studio.

The students inspected the main control units (Control Room) and learned about the mechanism of directing and montage of television programs, and from there to the play out room to explain how the final broadcast of the programs broadcast on the channel is made. At the end of the visit, the students were accompanied by Mr. Khaled Al-Laithi, Director of Production Department for Al-Nahar Channels Network, and the students were introduced to the different studios, and he explained how Autocue Unit works. The students met with a number of media professionals, including Ms. Bossi Al-Tayyar, presenter of (Ezzay Elsaha) program, and Ms. Marwa Al-Shafei, presenter of (Akla Beity) program.

Photos from inside the studio during the live filming of the (Azay Elsaha) for interviewer, Bossi Al-Tayyar

Students of the first Year while listening to Mr. Majid Amin’s explanation from inside the main studio of Al-Nahar channel

Students inside the play out room with Mr. Islam Muhammad Executive Director

Students inside the control room unit