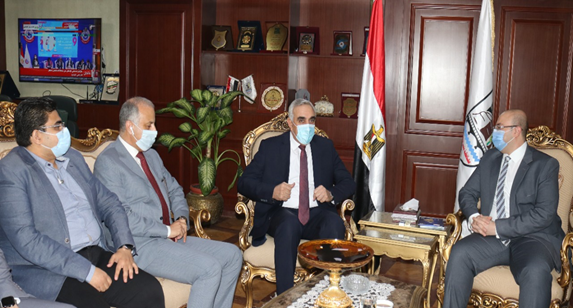 Dr. Muhammad Hani Ghoneim – Governor of Beni Suef – received in his office on Thursday noon, 10 September 2020, Ambassador Ahmed Nayef – the Ambassador of Iraq in Cairo and the accompanying delegation to his Excellency, in the presence of Prof. Dr. Hossam Al-Mallahi – President of Al-Nahda University, and Eng. Muhammad Al-Rashidi – Chairman of the Board of Trustees of the University, and the Vice Governors to discuss various aspects of cooperation.

The visit also witnessed a meeting in the presence of the Iraqi ambassador, his accompanying delegation and university leaders. In his speech during the meeting, Dr. Hossam Al-Mallahi, President of the University pointed out the strength of the distinguished historical relations between Egypt and Iraq. He also explained the features of the modern education system at the university, and the university administration sought to strengthen cooperation and educational relations between Al-Nahda University and Iraqi universities.

During the meeting, the Iraqi ambassador emphasized the depth of the historical relations between Egypt and Iraq, and praised the communication between the political leaders in the two countries, and also stressed Iraq’s keenness to support bilateral relations between Egypt and Iraq, especially in the fields of higher education and scientific research.

During the meeting, the Iraqi ambassador praised the enormous capabilities provided by the university in terms of research centers, laboratories and hospitals that improve the educational process, and called for support for cooperation between Al-Nahda University and Iraqi universities, and the exchange of visits between professors in various scientific disciplines.

A tour inside the university theater