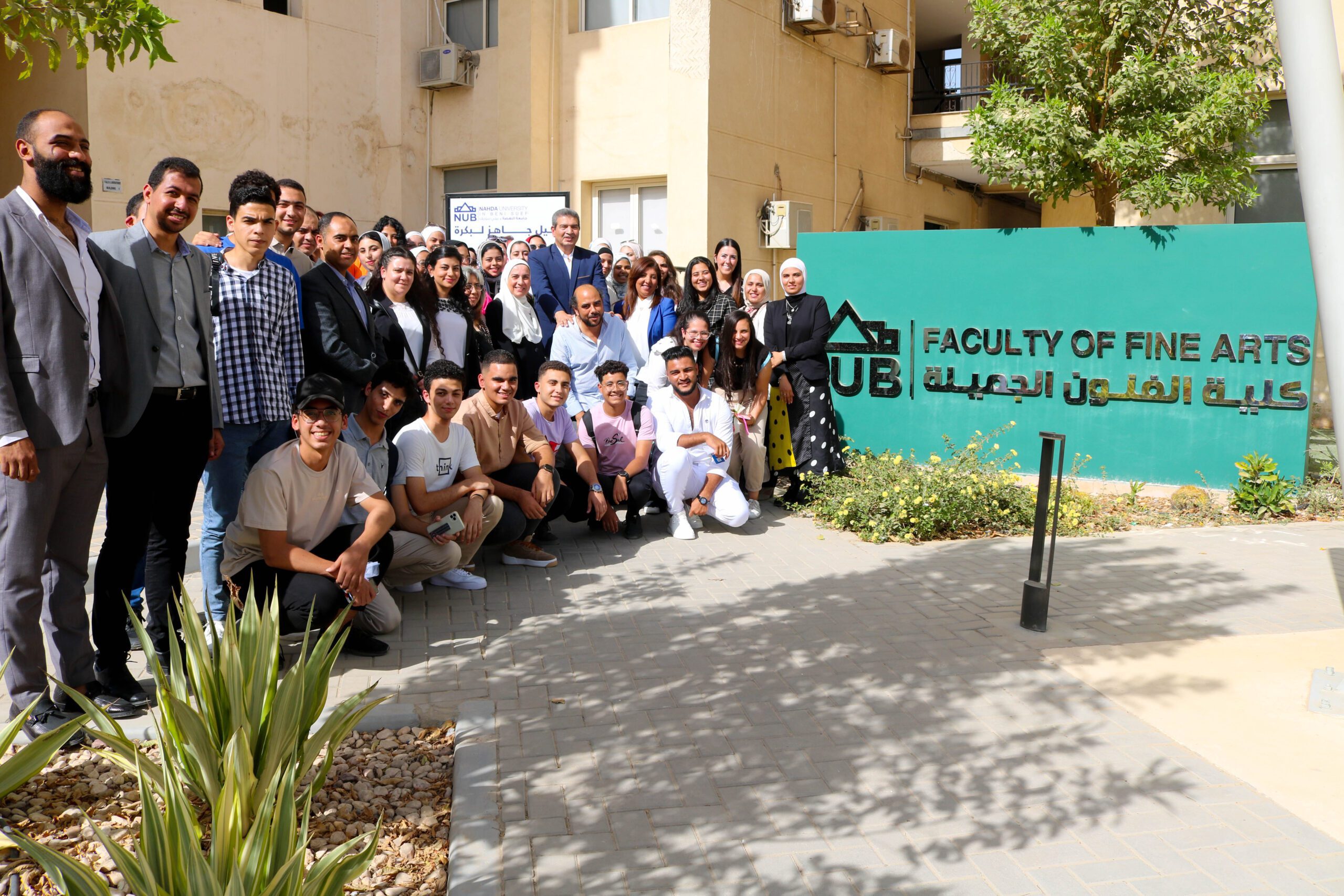 Dr. Muhammad Ayman Ashour, Minister of Higher Education and Scientific Research, issued a decision No. 2959 for the year 2022, approving the beginning of studying at the Faculty of Fine Arts, Al-Nahda University, starting from the first semester of the academic year 2022/2023.

Hossam Al-Mallahi, President of Nahda University and a member of the Senate, explained that the Sector Committee of the Supreme Council of Universities had approved the Bylaws for the bachelor’s program at the Faculty of Fine Arts at Al-Nahda University, In addition to what was stated in the report of the technical committee formed to study the material and human capabilities of the undergraduate program at the university.

Al-Mallahi added that the Faculty of Fine Arts at Al-Nahda University is the only faculty of its kind in private universities, and that the faculty’s policy aims to form and prepare the creative and experienced artist, who combines in his studies the artistic creative side with the applied commercial side, by combining academically and practically the curricula of studying traditional fine arts with its ancient history and its role in preparing an artist of a special kind, In addition to the modern applications of these fine arts, which qualifies the student for scientific and technical training in line with the local, regional and international labor market; Equipped with the latest media.

He stressed that the faculty is working to follow distinguished academic and professional programs in the fields of plastic arts, interior design, visual communication arts, music, and cinema, pointing out that the duration of study at the faculty is 4 years, divided into 8 main semesters, in addition to a summer semester that includes practical training. 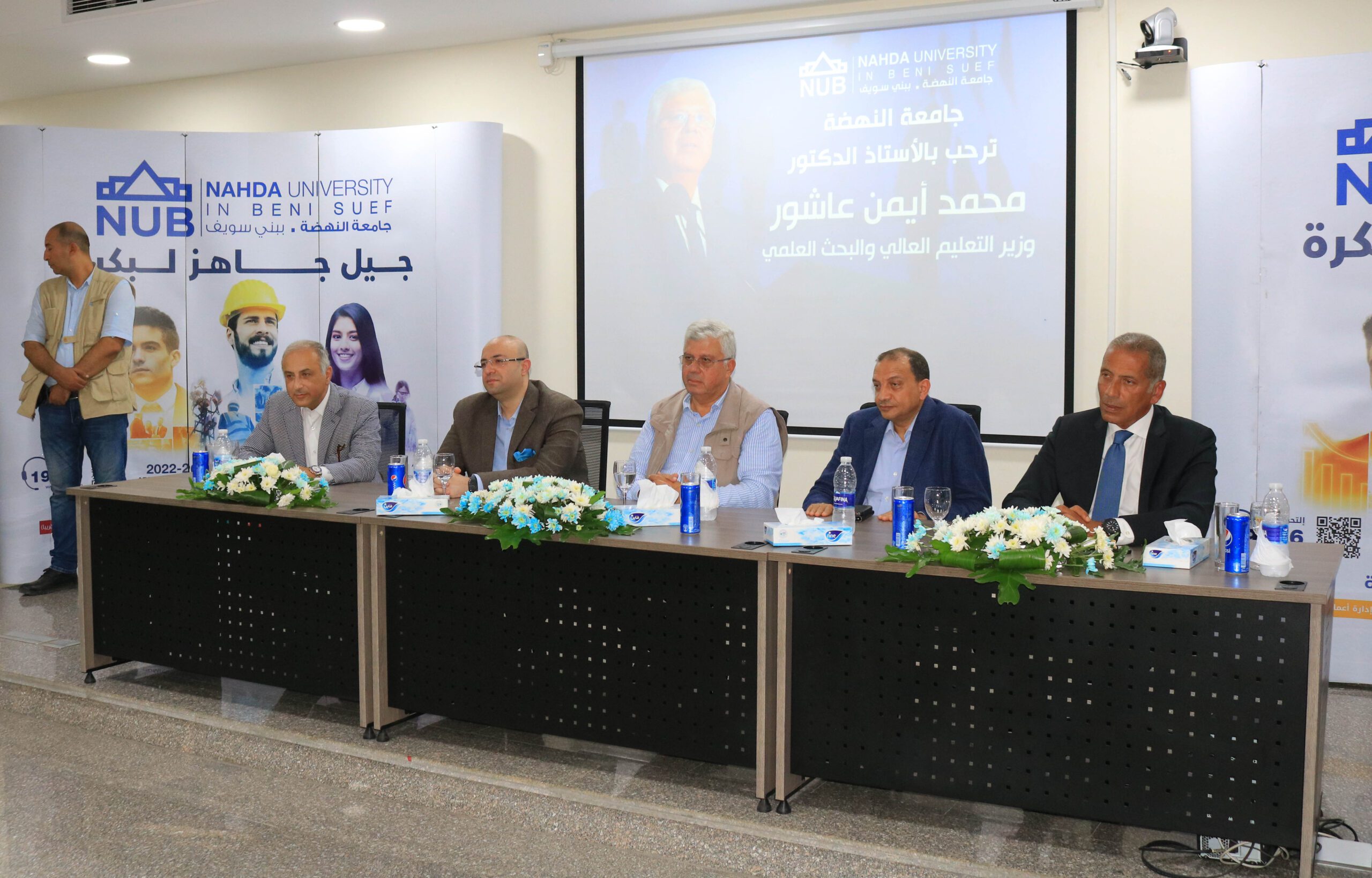 Among the ministry’s leaders are Dr. Adel Abdel Ghaffar – Media Adviser and Official Spokesperson for the Ministry, Dr. Hisham Farouk – Assistant Minister for Digital Transformation, Dr. Anwar Ismail – Executive Director of the Technical Consultation, Studies and Research Fund, Vice Presidents of the University, Deans of Faculties, and a group of members of the House of Representatives and Senate.

The Minister inspected the faculty of Physiotherapy at the university and its affiliated laboratories, including: Kinetic analysis laboratory, which is the second of its kind at the level of Egyptian universities, praising the advanced laboratory equipment inside the Faculty, and the distinguished educational level that the college provides to its students. Dr. Ayman Ashour pointed to the excellence of the scientific equipment at Al-Nahda University, which reflects the great role that private universities play in serving higher education in Egypt.

During his inspection tour, the Minister of Higher Education met the students of the Faculty of Human Medicine, and asked them to do more during their university studies, as well as their professional and practical life; To reach the highest levels of success.

The Governor of Beni Suef indicated that the visit of the Minister of Higher Education and Scientific Research to Beni Suef Governorate confirms the interest of the political leadership in Upper Egypt, especially Beni Suef Governorate, which is witnessing a remarkable development at the level of various higher education services.

For his part, Dr. Hossam Al-Mallahi congratulated Dr. Ayman Ashour; Assuming the portfolio of higher education and scientific research, praising his distinguished efforts during his tenure as Deputy Minister of Higher Education for University Affairs.

Eng. Muhammad Al-Rashidi Ali stressed that Al-Nahda University is constantly working to develop its academic and practical capabilities on a regular basis; To keep pace with the latest developments in the advanced world in educational services; To graduate students who are able to contribute to the development plans that Egypt is witnessing. 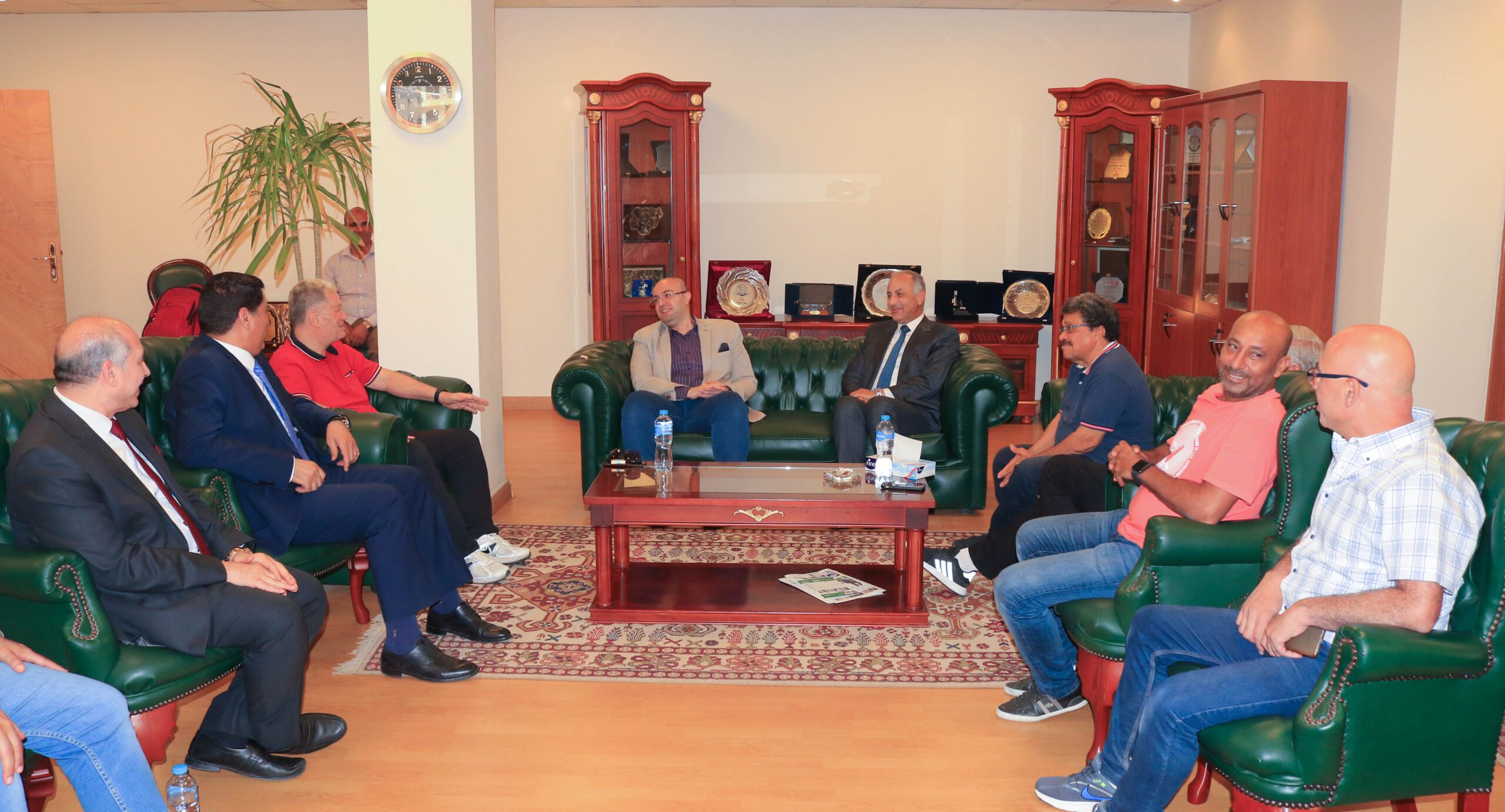 On Monday, August 15, 2022, Al-Nahda University witnessed the official opening of the Al-Ahly Club Academy, the first in Upper Egypt, on the stadiums of Al-Nahda University, which received in its first stages more than 300 Buds and juniors. In cooperation with the Century Club, and in the presence of Dr. Hossam Al-Mallahi – President of Al-Nahda University, a member of the Senate, Dr. Muhammad Hani Ghoneim, Governor of Beni Suef, and a group of Al-Ahly club stars headed by Captain Abdel Moneim Shata – President of Al-Ahly Club’s academies, Captain Ekrami Al-Shahat, and Captain Fawzy Scotty, Captain Yasser Rayan, and several representatives of the People’s Assembly and Senate in Beni Suef.

Hossam Al-Mallahi, President of Al-Nahda University, indicated that the cooperation between Al-Nahda University and Al-Ahly Club is a partnership between two major entities, with Al-Ahly club representing great value in Egyptian and African sports, And Al-Nahda University, which is the first and largest private university in Upper Egypt and one of the great beacons of science in Egypt, stressing on providing all the capabilities and the full support provided by the Chairman of the Board of Trustees, Eng. Mohammed Al-Rashidi, to the university in order to place “Al-Nahda” among the ranks of the major international universities.

Dr. Muhammad Hani Ghoneim – Governor of Beni Suef, stressed that the governorate is lucky to have Al-Nahda University on its land for its great contribution over the past years in supporting and developing the governorate, and that the presence of a large entity such as Al-Ahly Club Academy in Beni Suef is a Great pride for all the people of the province and a qualitative leap for the province to the position it deserves.

Captain Fawzi Scotti, a member of the Al-Ahly Distinguished Players Selection Committee, said that cooperation with Al-Nahda University opens the door to discovering more talents in Egypt, especially since Al-Ahly Club is constantly working through its academies to search for the best talents in Egypt. 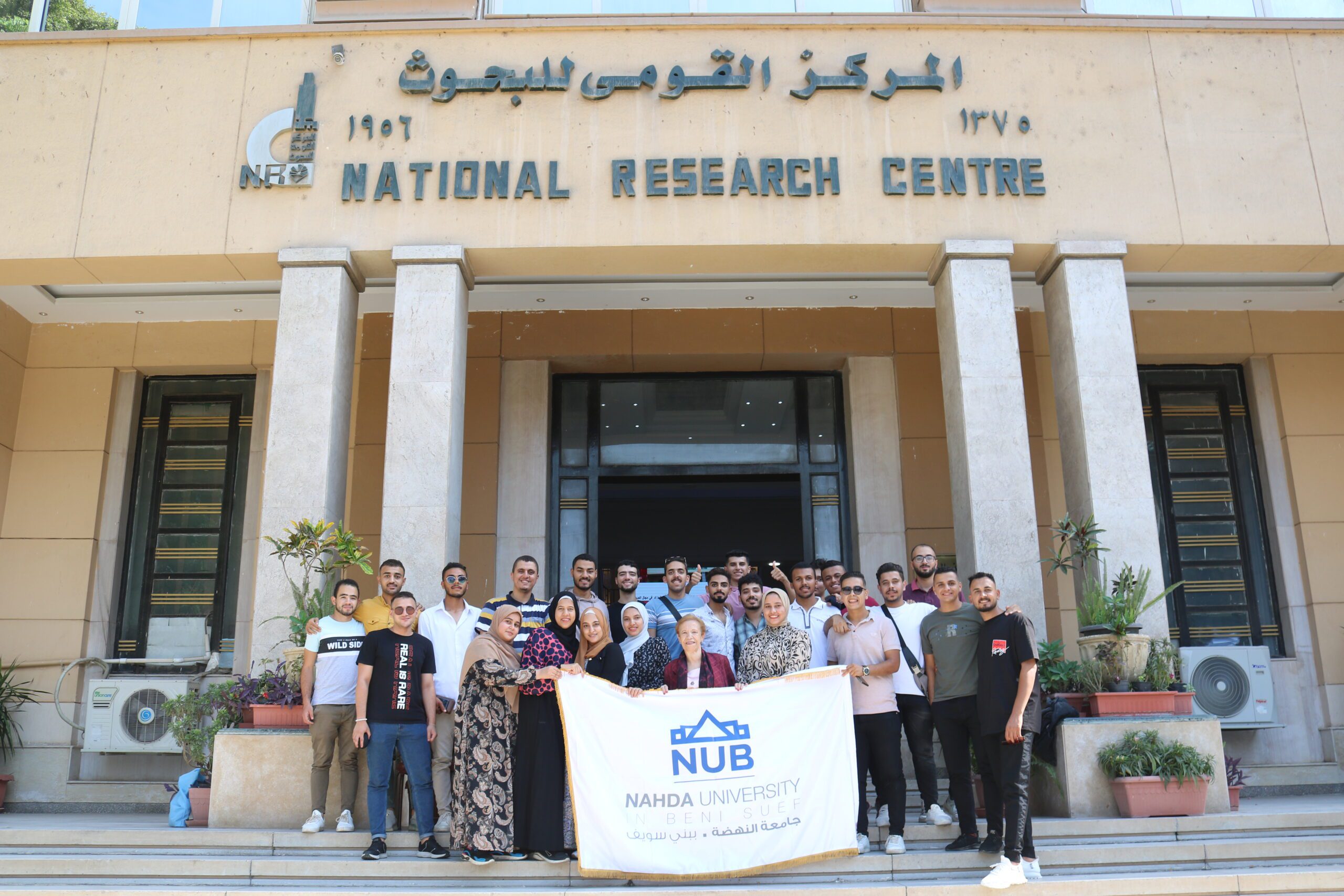 The Faculty of Pharmacy, Al-Nahda University, organized for its students, from July 31 to August 11, 2022, a practical training at the National Research Center, one of the largest research bodies in Egypt and the Middle East, In order to strengthen its relations with various institutions and companies, And the belief of Al-Nahda University that field Trips and trainings help its students acquire skills and refine their characters, and qualifying them to compete in the labor market after their graduation.

18 students from the faculty of Pharmacy have joined training in the laboratories of the National Research Center in the fields of: Therapeutic Chemistry – Classification of Plants – Aromatic Plants – Natural Compounds – Microbial Products – Drugs – Medicinal and Pharmaceutical Plants – Pharmaceutical Technology, which helps in developing their professional capabilities in the fields of work later, At the conclusion of the training period, certificates of appreciation were distributed to the participating students.